You have probably heard about the story of how Capablanca had learned to play chess. In case you have not, it would be interesting to know, indeed. When 4 years old little kid spectated his father playing chess for the first time in his life, from the second game he was already able to correct his father’s blunders. Seems impressive, does not it?

His father, Jose Maria Capablanca, father of 11 kids, was a soldier and battled in the Spanish-American war at the end of 19th century. He wanted to see his son as a great engineer and forbade all chess activities. That is why Jose Maria sent his son to Colombia University, where he was enrolled in engineering courses.

Before he moved to the USA, he was arguably the best chess player in Cuba, however, their parents did not take that fact seriously, as all they wanted was engineering, a profession that supplied everyone with shedloads of money. 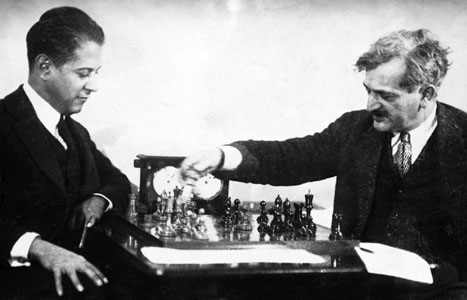 His parents were assured their son will conquer the world with his engineering talent. Instead, Jose Raul was left out of the university in the first semester, for he hated engineering. The reason why he ignored his studies was very awkward. Capablanca did not attend his classes, just because he was playing a match against USA’s best chess player Frank Marshall. He crashed out Marshall by winning 7 games more.

Gossips were spreading around the world about 19 years old teenager, who killed one of the most prosperous chess players of that time. Only chosen ones were able to survive Marshall’s unbearable attack’s. Have a look at this historical game between these two giants.

After tremendous success, Capablanca planned to challenge Lasker, the world champion of that time. Although Lasker imposed Cuban very heavy conditions on copyright and prize money, the match occurred in 1921.

After 14 games Lasker resigned and left Havana. Some whispers told that at that times he had some health issues and that was the main reason for his gloomy performance.

When the match ended, Lasker went on to announce: ‘’I have known other great masters, but only one genius: Capablanca”. Have a look at the 10th game of this match. It is likely that this delightful performance from Capablanca was the main factor why Lasker praised Capablanca in such an ear-pleasing way.

Capablanca is considered as one of the greatest positional players in the history. His endgame knowledge and instinct was very fascinating. Every single chess player who seeks for success should detect main clues of the greatest Latin American’s game.