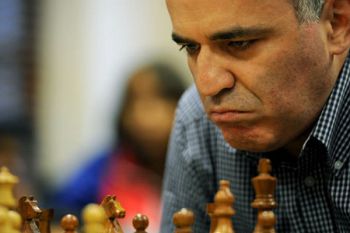 When other 12-old year’s teens were playing boyish games Garry Kasparov became Champion of USSR under -18 and the champion of the world under-20 at 17 years old. Breaking the rules yeah? His international fame came when he was 22 years old and became the youngest world chess champion in Chess history, in 1985.

“Kasparov always seems to find some sparks to create a fire on the board”. – Lubomir Kavalek

“Kasparov has won many Najdorfs and King's Indians not only because he had the best novelties, but because he fundamentally understood those positions better than his opponents. On the other hand, he was too stubborn to admit that the Berlin Variation of the Ruy Lopez was not 'his cup of tea', which ultimately cost him his World Championship title against Vladimir Kramnik in 2000”. - Ivan Sokolov

“Look at Garry Kasparov. After he loses, invariably he wins the next game. He just kills the next guy. That's something that we have to learn to be able to do”. - Maurice Ashley

“Kasparov had an especially honed feel for the initiative and developed the deep preparation for tournaments and matches that was applied by Alekhine, Botvinnik and Fischer...” - Anatoly Karpov

“Kasparov definitely has a great talent. There is nothing in chess he has been unable to deal with. The other world champions had something 'missing'. I can't say the same about Kasparov: he can do everything. If he wishes to play some type of positions brilliantly, he will do it. Nothing is impossible for him in chess”. - Vladimir Kramnik

Many people consider him the best player in the history.

•    His famous matches against the IBM supercomputer Deep Blue in 1996-97 were key to bringing artificial intelligence, and chess, into the mainstream.

•    Kasparov was World Champion for 15 years, the longest reign

“My play is based on the most general laws of chess and the particular features of the position”.

“In conclusion, if you want to unravel the multitude of secrets of chess then don't begrudge the time”.

“My chess philosophy has largely been developed under the influence of Ex-World Champion Mikhail Moiseevich Botvinnik. I am sure that the five years I spent at Botvinnik's school (1973-1978) played a decisive role in my formation as a chess player and determined the path of my subsequent improvement”.

The 13th Chess Champion Garry Kasparov’s best games show his genius mind. So it's not for nothing that he is one of the best players in the history of chess.By watching his games, you will make sure yourself in it.