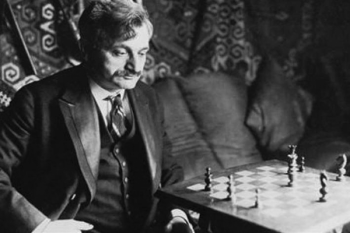 Emanuel Lasker was famous for his unique playing style. Many biographers call him the founder of the psychological approach in chess. It was considered that he could intentionally worsen his positions to confuse his opponents.

«I keep on fighting as long as my opponent can make a mistake». – Emanuel Lasker

He earned the World Chess Cup winning Steinitz in 1894.։ «I, who vanquished Steinitz, must see to it that his great achievement, his theories, should find justice, and I must avenge the wrongs he suffered». – Emanuel Lasker

Lasker held his title over 27 years.

«Lasker's style is like limpid clear water - with a dash of poison in it!» – Source Unknown

Lasker was an impressive person. He managed to understand a lot of chess. I was looking through his games again some time ago and was astonished: his knowledge was incredibly extensive for his time! He was the first to understand the importance of psychological factors and started to pay attention to them. - Vladimir Kramnik

Do you know that the 2nd World Chess Champion seriously was occupied with math and philosophy? By the way, he had a warm and friendly relationship with Albert Einstein.

Emanuel Lasker was undoubtedly one of the most interesting people I came to know in my later life. – Albert Einstein

For me, this personality, notwithstanding his fundamentally optimistic attitude, had a tragic note. The enormous mental resilience, without which no chess player can exist, was so much taken up by chess that he could never free his mind of this game, even when he was occupied by philosophical and humanitarian questions. – Albert Einstein (about Lasker)

Lasker lived with chess, which became his companion all of his life.

«It is too beautiful to spend your life upon. Many times have I managed to break with chess, yet I have always fallen in love with it again. I was too captivated by the conflict between ideas and opinions, attack, and defense, life, and death». Emanuel Lasker

Is the phenomenal game right psychology or the result of supernatural powers, as many people though? Try to understand yourself by watching the best games of Lasker.