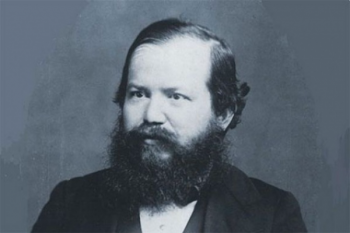 Wilhelm Steinitz is the first world chess Champion. To say that he achieved it very easily is wrong. He was the 13th child of his family, so that means that to expect financial support from the parents was wrong. But the love towards the chess was so strong that he was satisfied with the cardboard chessboard made by him.

«The significance of Steinitz's teaching is that he showed that in principle chess has a strictly-defined, logical nature». - Tigran Petrosian

«That which Steinitz gave to the theoretical aspect of the game when he was at his best is very remote to all-out home-bred chess philosophers, but with his views on Morphy, whom he tries to discredit completely, it is, of course, impossible to agree». - Alexander Alekhine

«It was Steinitz who was the first to establish the basic principles of general chess strategy. He was a pioneer and one of the most profound researches into the truth of the game, which was hidden from his contemporaries». - Jose Raul Capablanca

Perhaps not everyone knows that Wilhelm Steinitz was a talented journalist and that he earned his living long years with the help of that profession.

«Fame, I have already. Now I need the money».  During his peak career, he stopped tournaments to do journalism. It was his passion, wasn’t it

But leave chess completely, he couldn’t do.

«I am fully and entirely concentrated on the board. I never even consider my opponent's personality. So far as I am concerned, my opponent might as well be an abstraction or an automaton».

«A win by an unsound combination, however showy, fills me with artistic horror».

«No great player blundered oftener than I done. I was champion of the world for twenty-eight years because I was twenty years ahead of my time. I played on certain principles, which neither Zukertort nor anyone else of his time understood. The players of today, such as Lasker, Tarrasch, Pillsbury, Schlechter, and others have adopted my principles, and as is only natural, they have improved upon what I began, and that is the whole secret of the matter».

Steinitz had a great impact on the history not only with his game but also with the chess innovations.  Some debut versions were called after him, which were detailed cultivated by him.

«He developed complete strategic trends in the opening and the middlegame, based on his theory of accumulating small advantages. A classic example of such an innovation is his 'Steinitz Variation' in the French Defence». - Garry Kasparov

«Steinitz was strong in practice. He had deep thoughts and imaginative ideas. For instance, he stated that the king was a strong piece, able to defend itself. This idea is really imaginative and even true in some cases but it is not a part of the classical basis of the game». - Vladimir Kramnik

So we present you the best games of Wilhelm Steinitz.