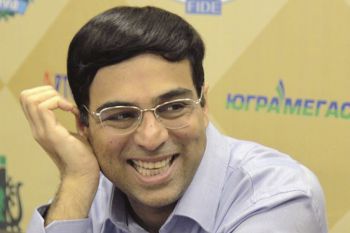 Viswanathan Anand was the 15th undisputed World Champion, reigning from 2007 until 2013. He was also FIDE World Champion from 2000-2002.Wishi was the first grandmaster of India who earned his title in 1988. He is considered to be a universal chess player, on that occasion Kramnik once said.

«I always considered him to be a colossal talent, one of the greatest in the whole history of chess. Each champion has had some sort of specialty, and he is creating counterplay in any position out of absolutely nowhere.

He’s got an amazing ability to constantly stretch himself so that even in some kind of Exchange Slav he nevertheless manages to attack something and create something.

He also plays absolutely brilliantly with knights, even better than Morozevich – if his knights start to jump around, particularly towards the king, then that’s that, it’s impossible to play against and they’ll just sweep away everything in their path. I noticed it’s better to get rid of them when you’re playing against him». - Vladimir Kramnik

Anand attributes the late Bobby Fischer as the best chess player of all time.

He managed to do sports, no matter how because without it he couldn’t play chess.

«I attend to my fitness. I go the gym every day and try to maintain my physical fitness; without that, it is tough to take challenges on the chessboard». – Anand

“I think an important lesson from the game is that once you have made a move, you cannot take it back. You really have to measure your decisions. You think a lot. You evaluate your choices very carefully. There's never any guarantee about what's going to follow once you have made a decision». -Anand

“Sometimes, if you are nervous, it could actually turn out to be a manifestation of your exhaustion. The point is that any setback is bad, but if you see it from a perspective, you'll recover”. -Vishy Anand

“The broader the chess player you are, the easier it is to be competitive, and the same seems to be true of mathematics - if you can find links between different branches of mathematics, it can help you resolve problems. In both mathematics and chess, you study existing theory and use that to go forward”.-Anand

“I like to keep myself physically and mentally fit before any important match. I usually take a short nap just before the game and do not practice immediately before the tournament”. -Anand

“I would say my biggest skill is flexibility. I’m generally open to changing my approach if something hits the wall. I’m a hard-worker. I think I work hard because chess interests me, so I’m not sure I’d work hard in something which bores me, but I’m a hard-worker at least for chess, and that includes learning to maintain my fitness and things like that.

More recently I’ve had to reorient my style towards spontaneity and creativity again – essentially almost back to where I came from because we’ve sort of come full circle”. -Vishy Anand

“To be honest I've learned a lot from him in the past, both playing against him and especially while training with him. Just the kind of positions that he understands, the way he would just outplay me like no one else did in several kinds of positions. Also, the precision with which he analyses games and positions has been an eye-opener.” Carlsen on Anand

“Anand is a modest and dignified person. He is not obsessed with being on the cover of popular magazines or being hounded by the media. He, like Kramnik, doesn't want the world to talk only about him.

Anand started his career as a bright tactical player who could win a game in 20 minutes. During the years he matured as an all-around player who could excel in everything on the chess board.” Gelfand on Anand

“Anand is a very strong practical player. He does not strive for the absolutely “clean” opening play of Kramnik, he does not have the maximalism of Kasparov, and not the subtlety of Karpov.

Anand, for example, can make a quick draw as White, if he has not played the opening well, or with a weaker opponent, if he thinks it is “necessary” or “appropriate”. But if the opponent appears to be tired, or not in form, then Anand seems to sense this and strives for the maximum from the game.” Morozevich on Anand

We present you the best games of Viswanathan Anand, one of the best players in the chess history.