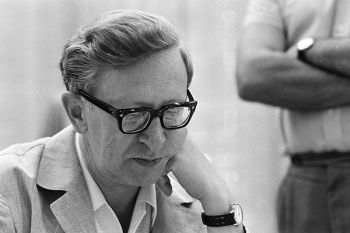 He started to learn Chess at the age of 6 from his father who was Chess first class.

My father instilled in me a love for so-called "simple positions", with the participation of only a few pieces. I was able to gain a deep feeling for what each piece is capable of, to sense their peculiarities, their strength and importance in various different situations on the board, the limits of their capabilities, what they "like" and what they "don't like" and how they behave...

Such a "mutual understanding" with the pieces enables a player to see that which often remains concealed to purely logical analysis. It is then that the innate ability of a player, which I call a sense of harmony, manifests itself. - Vasily Smyslov

He had an interesting playing style which was neither defending nor attacking.

Smyslov's manner of play is somehow sneaky: he does not attack you directly, he does not mount a straightforward offensive, he does not threaten to give an immediate mate, but he steals up by other secret means, known only to himself.

His unsuspecting opponents do not see through his secret plans, it appears to them that everything is alright... Then they come to their senses, suspect something bad, but it is already too late! - Max Euwe

Smyslov is known as a player of very distinctive and interesting style, as a virtuoso of the endgame. Smyslov is a modern Capablanca. We have all learned something from his brilliant technique of playing endings. - Mikhail Tal

Vasily Vasilievich has an incredible intuition, and I would call it his "hand" - that is, his hand knows on which square to place every piece, and he does not need to calculate anything with his head. - Boris Spassky

For him Chess was a piece of art։ «I consider chess an art. I grew up in an atmosphere filled with music and chess».

Smyslov was the author of the numerous books who played and now play a great role in the education of many chess players.