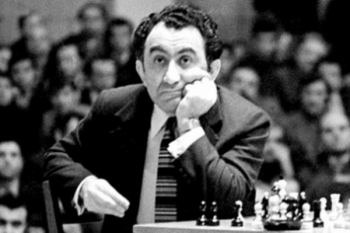 Tigran Petrosian is the 9th World Chess Champion, whose games educated and still being used by the different generations.

"Some consider that when I play I am excessively cautious, but it seems to me that the question may be a different one. I try to avoid chance. Those who rely on chance should play cards or roulette. Chess is something quite different". - Tigran Petrosian

"I know I am not on a form when the best move is not the one that first comes to my mind". - Tigran Petrosian

"Chess is a game by its form, an art by its content and a science by the difficulty of gaining mastery in it. Chess can convey as much happiness as a good book or work of music can. However, it is necessary to learn to play well and only afterward will one experience real delight". - Tigran Petrosian

Patience and the mastery of defending made Petrosian player that was hard to win. He could use the opponent’s mistakes and never showed his own mistakes.

Tigran Petrosian confessed that during his career he showed his best game in 1958-1963 when he was fighting for the World Champion Cup.

"I was inspired by the fight leading to my goal, but when you achieve your goals, the wish to move forward decreases. The older you get, the more those wishes diminish”. Tigran Petrosian

The strongest chess players of that time who was competing with him valued the game of the 9th World Chess Champion.

In those years, it was easier to win the Soviet Championship than a game against "Iron Tigran". — Lev Polugaevsky

Among all our grandmasters Petrosian possesses the most distinctive and original talent: he places his pieces so astutely, that all attacks on them prove very difficult. This is a subtle and rare style, to which it is hard to adapt. - Mikhail Botvinnik

Petrosian, of course, was a phenomenal chess talent; he played so deeply and interestingly, that he sometimes found ideas for his opponents that never even entered their heads. Petrosian had Capablanca's technique and Schlechter's sense of danger. - Mikhail Tal

In all of his games, there is always something to learn but we collected Tigran Petrosian’s best games for showing you his real power of playing.