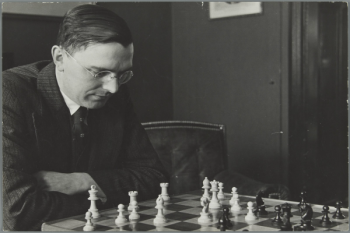 Max Euwe is the 5th World Chess Champion who earned this title in 1935 defeating Alekhine.

Euwe played his first tournament at age 10, winning every game. He was a smart boy who stood out with his phenomenal logic and thinking.

He was noted for his logical approach and for his knowledge of the openings, in which he made major contributions to chess theory.

Whoever sees no other aim in the game than that of giving checkmate to one's opponent will never become a good Chess player. Max Euwe

Euwe was on the list of the world’s strongest chess players till the ends of 1940, and after his chess career, he seriously involved in Informatics.

His games stood out with his logic and a clear calculation of moves. He considered being an expert of strong tactics and debut theory.

Euwe wrote over 70 chess books, far more than any other World Champion, among them are more famous the chess course books.

A distinctive feature of Euwe's books was a simple and accessible presentation of the basic principles of conducting a positional game.

Euwe highly appreciated Wilhelm Steinitz, one of the creators of the positional game, and in the "Course of Chess Lectures" discussed his games in details.

After finishing his career, Max Euwe held the position of the FIDE president in 1970. He made quite good changes in Chess, but some decisions cause dissatisfactions of the critics and he left his position in 1978.

Here we present you Max Euwe’s best games where you can see his strongest sides.