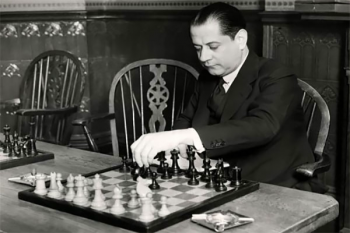 The 3rd World Chess Champion Jose Raul Capablanca had a fantastic technique and considered to be the virtuoso of the decade. He learned to play chess still at the age of 4. On the third day, he already knew all the moves. From that time was raising the chess titan.

In Capablanca's games, the experts specified his accuracy, intuition and the ability to perceive the situation fast and analyze the opportunity, the excellent technique.

Without technique, it is impossible to reach the top in chess, and therefore we all try to borrow from Capablanca his wonderful, subtle technique. - Mikhail Tal

You cannot play chess unless you have studied his games. – Mikhail Botvinnik

Capablanca’s games generally take the following course: he begins with a series of extremely fine prophylactic maneuvers, which neutralize his opponent’s attempts to complicate the game; he then proceeds, slowly but surely, to set up an attacking position. This attacking position, after a series of simplifications, is transformed into a favorable endgame, which he conducts with matchless technique. – Aaron Nimzowitsch

Capablanca could also understand the opponent’s weak sides fast and use them for his victory. He was considered to be “The chess technics in human form”. Being one of the famous players in his time, Capablanca enjoyed great authority; hence the memories of him are very rich.

Capablanca was among the greatest of chess players, but not because of his endgame. His trick was to keep his openings simple, and then play with such brilliance in the middlegame that the game was decided - even though his opponent didn't always know it - before they arrived at the ending. - Robert Fischer

I have known many chess players, but among them, there has been only one genius - Capablanca! His idea was to win by maneuvering. Capablanca's genius reveals itself in his probing of the opponent's weak points. The slightest weakness cannot escape from his keen eye. - Emanuel Lasker

Jose Raul Capablanca was famous and valued not only in his times. His games educated and continue to educate many generations.

Capablanca was a genius. He was an exception that did not obey any rule. - Vladimir Kramnik

Capablanca possessed an amazing ability to quickly see into a position and intuitively grasp its main features. His style, one of the purest, most crystal-clear in the entire history of chess, astonishes one with its logic. - Garry Kasparov

Do you know that

•    He wrote several chess books during his career, one of the famous was “Chess Fundamentals”  Mikhail Botvinnik regarded this as the best chess book ever written.

But this is not all !

We collected Jose Raul Capablanca’s best games, by watching them we can find numerous interesting and educative things and use in our own games.