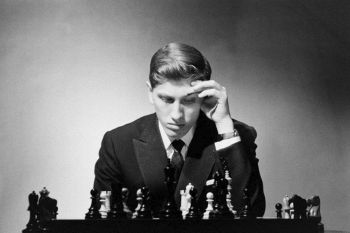 Bobby Fischer is considered to be one of the best and phenomenal chess players of the history.

It seemed that Robert James Fischer lived only with chess.

«All I want to do, ever, is just play chess»-Fischer

I don’t believe in psychology. I believe in good moves. – Bobby Fischer

A big part of his day he spent in front of Chessboard.

I give 98 percent of my mental energy to chess. Others give only 2 percent. – Bobby Fischer

He played only for victory. In case of the defeat, he took pills.

I play honestly and I play to win. If I lose, I take my medicine. – Bobby Fischer

His greatness was accepted by everyone, and it continues so, even nowadays.

His chess was always razor-sharp, rational and brilliant. One of the best ever– Dave Regis (on Fischer)

Many chess players were surprised when after the game, Fischer quietly explained: "I had already analyzed this possibility" in a position which I thought was not possible to foresee from the opening. – Mikhail Tal

There's never before been a chess player with such a thorough knowledge of the intricacies of the game and such an absolutely indomitable will to win. I think Bobby is the greatest player that ever lived. – Lisa Lane

The goal of his whole life was to become the World Chess Champion. For having a good form he also involved in swimming, tennis, and skiing.

What can I say about Fischer? I feel this man had to be the World Champion and nothing would stop him. It was a foregone conclusion. His career took a rather roundabout course but everything was already mapped out! I think that five years before he became World Champion, everyone was aware that the inevitable would happen. He was a real driving force! And Spassky got run over by that 'machine'. I think that any other player would have lost to Fischer too. They were not much weaker, it was the will of fate - Fischer would have broken through any cordon. - Vladimir Kramnik

With his games were educated generations. He was a man who left great heritage in classical Chess.

Fischer is like Zeus - he is the God of the gods. - Nigel Short

Here we present the best games of the whole-time genius Bobby Fischer.